Well here we are. The month of March. Spring is just around the corner. Soon flowers will be emerging from the earth, tiny little birds will be hatching out of their eggs. And people all over the United States of America will be shouting at their TV. 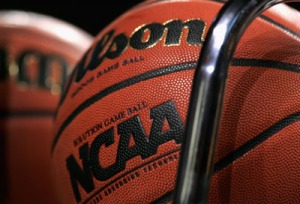 That’s right. March Madness is almost here. Which means it’s time again for Amanda to jump on the NCAA Men’s Basketball bandwagon. I haven’t watched a single game all the way through all season and yet I will fill out a bracket. And I will do it in no logical manner whatsoever.

Pick the team with the higher seeding? Nah!
Pick the team with the best winning records? No thanks.
Have loyalties to the teams I pick? I don’t think so!
Does the college have a funny names? YES PLEASE!
Do they have a hilarious mascot? YUP!
Are they Gonzaga? UM ya they’ll be the National Champions!

Yearly I just hop right on the Gonzaga bandwagon. Why? I don’t know. Probably because #1: Gonzaga is hilarious sounding, #2: They have a bulldog as a mascot. Bulldogs are great. And #3 I like to root for the underdog. So ya. I want Gonzaga to win it all. So what? Maybe I’ve just gone ahead and completely lost it. I’m okay with this. I tell you what though. One year Gonzaga will win it all. And then I will be the richest person ever. I will win all the bracket contests I enter, which is roughly 1 billion.

So here it is guys. Amanda’s 2012 NCAA Tournament bracket: 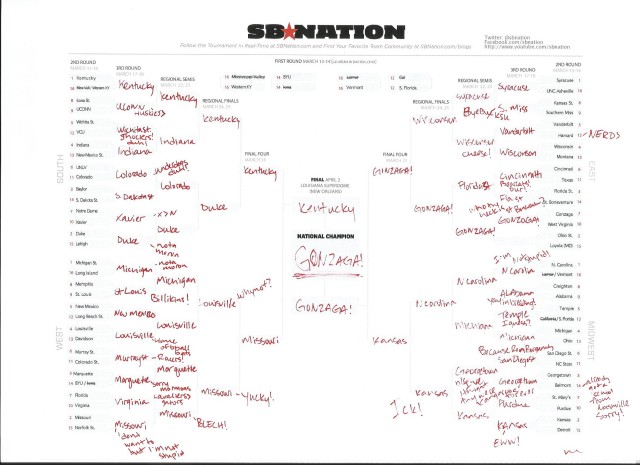 As you can see, I’ve got Gonzaga going all the way, as per the usual. But you know what? This is their year. I feel it in my bones. I have no knowledge about their current skill level at basketball, but they’ll take it. They will be the 2012 national champions.

And when they are, I will fly all the way to Washington state to be in their victory parade. I will make a sign proclaiming myself their #1 fan. Isn’t this what everyone wants anyway? For me to be the real winner?

[Editors note: I just realized I left the winner of the Ohio St. / Loyola game blank. My bad. Obviously it doesn’t really matter because Gonzaga will beat the winner of that one anyway, but I choose Ohio St…cause I ain’t no dummy]

4 comments on “The Madness of March”