Let me set the scene for you.

It’s a delightful May evening in Washington DC. It’s warm but there’s just enough of a cool breeze to keep a person from getting heat stroke. A perfect night to take in a baseball game at Nationals Park.

You’re sitting in the upper deck enjoying a ballpark frank and maybe a cola of sorts. You’ve just sat back down after the a rousing chorus of “Take Me Out to the Ballgame” signaling the classic 7th inning stretch. Next thing you know a bloodied 19-year-old ventures out onto the field.

You’re shocked, appalled and maybe even vomiting a little bit of your ballpark frank back up, when you realize, “Hey wait! That’s not just any bloody faced 19-year-old! That’s our wunderkind of an outfielder, Bryce Harper! What the heck happened to him?”

Well, it seems this young, talented, first-round draft pick was getting frustrated with his inability to connect his bat with a ball. So he did the most logical thing he could think of.

He went down into the dugout tunnel and slammed his bat into the wall.

Apparently, young Bryce does this often. Normally, he slams that bat hard into concrete and goes back onto the field with a little less anger, but this time, that bat fought back. That bat was tired of being slammed into things and decided to get its revenge.

It smacked Bryce Harper right in the face. That bat just bounced right off the wall. Into his face. Either he didn’t realize that the bat had caused him some serious face marring or he just didn’t care but he went back onto that field with blood dripping down his face, as if nothing out of the ordinary was happening.

I imagine the conversation between Harper and Rick Ankiel went something like this:

“Uh. Hey Harpy*….”
“Ya Anks*?”
“I don’t want this to be awkward, but you’ve got some blood leaking out of your eyebrow.”
“Oh, ya Anks. That’s probably because I just went down into the tunnel back there and slammed my bat into the wall, then it bounced back into my face. So ya…that’s probably why I’m bleeding.”
“That was pretty stupid Harpy.”
“Get off my back old man! I’m a 19-year-old rookie. I do stupid things!”
“Yes you do Harpy, yes you do.”

So then young Harpy recieved 10 stitches in his eyebrow. And as if hitting himself in the face with a baseball bat wasn’t enough he had to wear this sign of shame for the rest of the game and was also forced to sit out of the lineup for the next two. 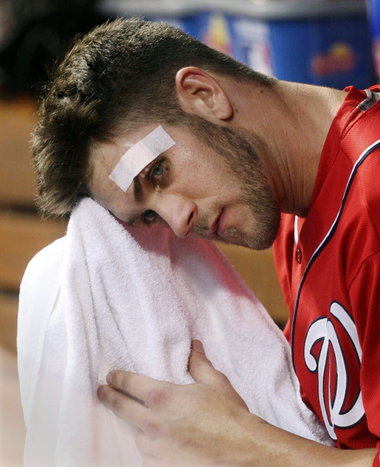 The moral of the story is: if you are upset about going 0-5 in your at-bats don’t hit your wooden bat into a cement wall. It will hit you back.

Quite frankly, I’m surprised this hasn’t happened to him sooner. Logical sense tells me that if I slam something hard into something slightly harder it will bounce back.

But you know, Harper has obviously skipped out on the college experience and that’s why he’s a 19-year-old MLB player and I’m not. We’ll chalk this one up to youthful stupidity.

In the meantime maybe the Nationals should buy the guy some Sock ‘Em Boppers. 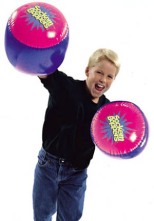 More fun than a pillow fight…or having your own baseball bat hit you directly in the face.

*I made up these nicknames, but I will be incredible upset to find out they aren’t real.

[Side note. The guy does NOT look 19. I’m seeing at least 25, they should probably check his birth certificate. But you know, whatev.]